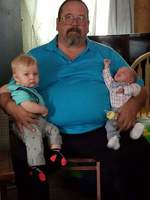 Michael Roth of Pottsville, a life-long truck driver, died peacefully with close family at his bedside, in Lehigh Valley Hospital Muhlenberg Campus, on May 12, 2020 at the age of 54 years old.
Michael is survived by his wife Samantha Roth of Pottsville, PA; his 3 children Jessica Roth of Reading, PA, Shawn Roth of Pottsville, PA, and Victoria Lutz of Pottsville, PA; his 4 grandchildren Hazle Westcoat, Colton Roth, Jaxson Nies and McKenzie Nies; and brother Terrence Roth of Toledo, OH. He is preceded in death by his father Ralph Roth and mother Luise Sievers.
Michael was born in Lowell Massachusetts, on July 23, 1965 to Ralph Roth and Luise Sievers. He graduated from Pine Grove Area High School in 1984. In 1984 he enlisted in the Army Reserves and served until 1986. In July of 1987, Mike married his first wife, Deborah Chrisman. Later that year in December of 1987, they welcomed their first child, a daughter, Jessica. Around 1987, he started his 30 plus years career as a truck driver. In November of 1989 they welcomed their second child, a son, Shawn. On December 4, 2015, Michael happily married his second wife, Samantha Pittenger.
Michael enjoyed being an Opa to his grandchildren along with being a truck driver the most in life. He enjoyed riding motorcycles when he was a young adult. He listened to Nickelback and XM radio, especially, Howard Stern and David Ramsey. Being an outdoors man, he liked cooking out on the grill and fishing. He was always willing to be a listening ear to anyone about anything and offered his advice when warranted. Family and friends were the most important aspects of his life.
A small memorial service for close family only will be held on Sunday, May 17, 2020 at 1 p.m. in Pine Grove, PA. When lockdown is lifted in June a larger memorial service will be held for all family and friends. Flowers, donations, and condolences can be sent to 521 W. Race Street, Pottsville, PA, 17901