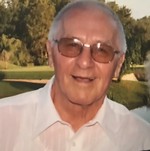 Donald Edward Mann, age 88, of Allentown, PA, passed away on October 2, 2019 in the comfort of his home surrounded by his loving family. He was born on December 15, 1930 in Allentown, PA to William C. and Matilda M. (Schlichting) Mann. He was the fourth child of their eight children; Brothers William, Barry, Stanley & Richard and Sisters Joy, Marie and Jeannie.
He proudly served his country in the US Army, where he bravely fought in the Korean War and earned 3 Service Medal of Honors.
Donald married Joan Roxie Claire Beitler on March 21, 1953 and they celebrated
their 66th wedding anniversary this year.
Donald and Joan had 5 children and raised their 1st born granddaughter as their own. Sons; Bruce, Donald K., (Butch) Daughters; Robin and husband John Lighting, Lori, and husband Robert Goldman, Wendy and husband Mark Roberts, and the last of the Mohicans as he would call her, Joan Jr. (Buddie) and husband Michael Kisslinger.
Grandchildren; Stacy Heiserman, Ciara Roberts, Markie Roberts, Kelsey Roberts, Holly Cipollo, Krystle Walters, Tonya Mack, Travis Mann and Kaylee Mann and 22 beautiful Great Grandchildren, and another on the way, all to whom brought him a lot of laughs and great joy.
In addition to his parents, Donald is preceded in death by 2 Great Grandchildren and his most loyal and trusted buddies of all, his Rat Terrier, named Mikey and German Shepard named Duke.

Donald was a machinist at International Minerals and Chemical Company (formerly Trojan Powder Company). He kept busy and found pleasure in his early retirement years by helping his son, Bruce with his HVAC business. He enjoyed spending time with his family, reading the Morning Call, watching the news, listening to Roy Orbison, having good conversation, taking his dog Mikey for walks, vacations, playing taxi, often picking up his great grandchildren from school, babysitting, baking bread, playing pool in the blue room, deep sea fishing and deer hunting.

Donald was a great husband, wonderful father and grandfather, and an all around amazing, smart and hard working man. His life was a blessing and his memories are like treasures for each and every one of us. He will be loved and missed immensely by all.

Family and friends may call from 9am-10am on Saturday, October 5, 2019 at New Christian Harvest Church, 1201 N. Ulster St. Allentown, PA 18109 with a service to follow. Interment for Donald will take place at Northwood Cemetery in Emmaus at a later date.


In lieu of flowers, memorial contributions may be made to the church.