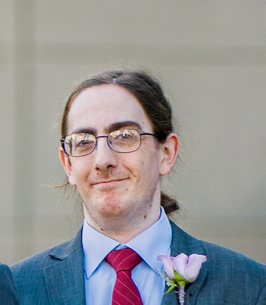 Alexander Scot (“Alex”) Kramer of Bethlehem, PA passed away suddenly on Monday, October 31st, 2022. He was 40 years old. Alex was a beloved son, brother, nephew, cousin, and friend who will be deeply missed. He was brilliant, kind, thoughtful, and deeply generous, with a quick and creative wit that could easily have you doubled over with a well-timed quip. Alex also had the biggest of hearts – he was there for his family and friends always and in all ways, and at no time was this more evident than when he moved out of state to care for his mother. Alex epitomized the phrase “still waters run deep,” and if you were privileged enough to be part of his inner world, you were indeed a lucky person.

Alex was born on September 26, 1982 in Bethlehem, PA to Randolph Harold and Ruth Ann (Legg) Kramer. He was raised in Bethlehem and lived in Kingwood, WV from 2012-2015 before returning to PA. Alex attended Liberty High School and went on to study accounting at Northampton Community College.

After his studies, he worked for H&R Block for more than 15 years in Easton, PA and Kingwood, WV, where he was well loved by his colleagues for his intelligence, patience, and helpfulness.

Among Alex’s many interests were his Philadelphia Eagles, “Weird Al” Yankovic, classic video games and consoles, computers, biking, and consistently beating his sister and friends at board and word games. He also loved attending music shows and events. He was an avid Musikfest attendee, and he had recently attended a VIP “Weird Al” experience that was a huge highlight for him. Alex was also a great writer, creative and gifted with a turn of phrase.

Alex was preceded in death by mother Ruth Ann (Legg) Kramer of Bethlehem, PA as well as grandparents Harold and Corinne Kramer, Raymond Legg Sr., and Eileen and George Hartman.
He is survived by his father Randy Kramer of Bethlehem, PA; his sister Leslie Belloso and her husband Ian of Whittier, CA; and numerous aunts, uncles, and cousins: the Young family and Doug and Kathy Kramer of PA; The Weaver/Beasley family of TX; and the Legg family and the Miller/Rejman/Brown family, all of TN.

A memorial gathering will be held at a future date in Bethlehem, PA. In lieu of flowers, donations may be made to the Ronald McDonald House Charities, or a charity of your choice, in Alex’s memory.

This tremendous loss of someone far too young reminds us that life is short – we must treasure those we love for as long as we have the chance. Alex will never be forgotten.